Mortgage Originations Are on Pace for Best Year Ever

Americans are poised to take more mortgages this year than they did even during the run-up to the 2008-09 financial crisis.

In the first nine months of the year, lenders extended $2.8 trillion of mortgages, according to industry-research firm Inside Mortgage Finance. The boom has extended into the final quarter of 2020, prompting analysts to predict origination volume will exceed the prior record of $3.7 trillion in 2003.

The home-lending surge is an unexpected reverberation of the Covid-19 recession. The pandemic has put millions of people out of work and made it tougher to show homes to prospective buyers. But it has also ushered in record-low interest rates that prompted millions to refinance and lower their monthly payments or trim the length of their loans. 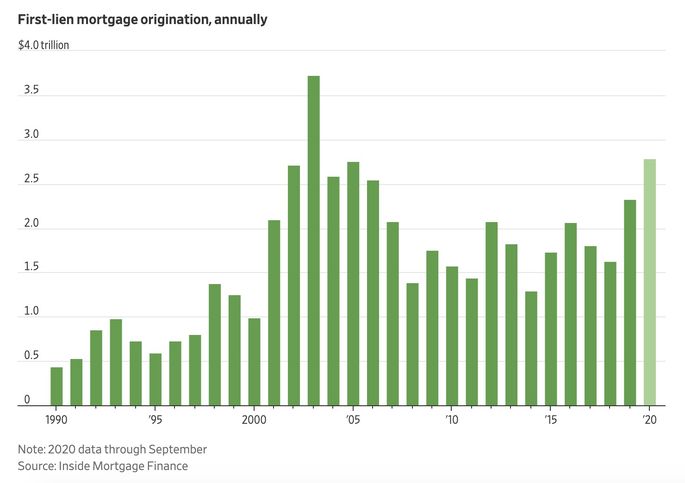 “2003 was a record that nobody thought would ever be achieved again,” said Guy Cecala, chief executive of Inside Mortgage Finance. That year low 30-year mortgage rates led to a surge in refinancings.

In the first three quarters of 2020, refis made up 65% of all originations, on pace to be the highest share since 2012, according to Inside Mortgage Finance.

As was the case in 2004, refinancing activity may fall next year unless rates drop significantly below their record low of 2.71%. That poses risks for the industry, in particular the nonbank lenders that extended the majority of mortgage credit so far this year.

Nonbanks including Quicken Loans, which is part of Rocket Cos., and United Wholesale Mortgage have grown aggressively during the pandemic, and a handful have gone public or made plans to do so, setting up high expectations for their businesses going forward.

When volume dropped off in 2004, lenders intent on continuing to grow loosened underwriting standards to bring in more business, writing loans that customers ultimately couldn’t repay. “If 2003 has any lessons for us, it’s that starting in 2004 and 2005, the seeds for the foreclosure crisis were planted,” Mr. Cecala said. The crisis that followed transformed mortgage lending, leading to regulatory changes meant to prevent a repeat.

Despite the pandemic, 2020 brought a confluence of good news for mortgage lenders. The 30-year fixed mortgage rate dipped below 3% in July and stayed there. That meant a swath of homeowners—more than nine million—saved money by refinancing this year, according to forecasts by Black Knight Inc., a mortgage technology and data company.

Jim Brennan of West Hartford, Conn., refinanced his 30-year mortgage into a 15-year mortgage over the summer, cutting his rate to 2.49% from 3.88%. The monthly payments on the Colonial he shares with his wife and son increased by a few hundreds dollars a month, but he expects to save tens of thousands of dollars by reducing the loan term.

“It’s certainly worth it given the amount of money you can save or the amount of cash you can free up,” he said. Some of his friends and family had refinanced right around the time he did, he added.

Other factors have supported the refi boom. Those waiting out the pandemic in their living rooms suddenly had time to do the paperwork. An industry accustomed to appraising properties and doing closings in person devised digital workarounds. 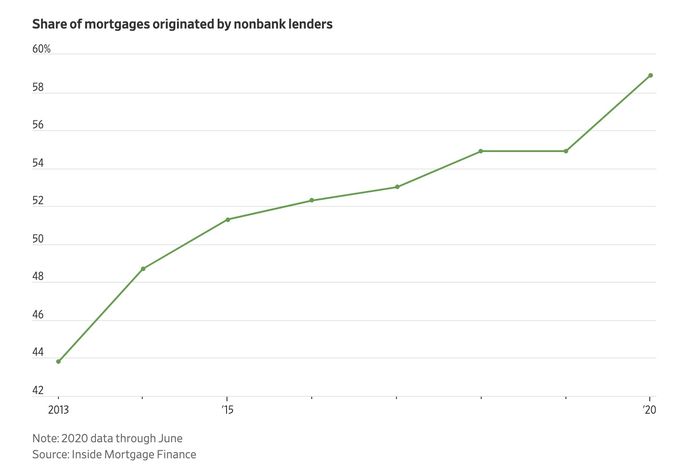 What’s more, homeowners have increasingly used refinancing this year to pull cash from their homes, according to Freddie Mac estimates. Cash-out refis generally increase the balance of a loan but provide money that can be used for renovations or to pay bills.

Mortgage lenders put in overtime trying to meet the refinancing demand. Michael Menatian, owner of Sanborn Mortgage Corp. in West Hartford, said his business doubled this year from the prior two years. “It’s been a fantastic year, and we needed it,” he said.

There have been some roadblocks. Mortgage companies that also service loans had to shell out money to front payments for struggling borrowers who entered forbearance programs after the pandemic hit, prompting concern that some lenders would run out of cash. But many of the companies with origination businesses more than made up for it by making new loans, analysts say.

This month Fannie Mae and Freddie Mac, the government-backed mortgage giants, began charging an additional fee on refinance loans that they purchase from mortgage companies. That fee stands to push up the interest rate for refis going forward, which could eat into demand.

Still, purchase demand is high. Americans stockpiled savings and trimmed their expenses when the economy effectively shut down, freeing up cash for down payments. Many people who didn’t lose jobs and decided they needed more space left cities for suburbs or bought second houses.

Zack Dagneau and his family moved from the Boston area to West Hartford and closed on a home in August. A new job prompted the move, as well as a desire to be closer to family and have more space.

“The pandemic really focused a lot of the reasons we had been looking to move in the first place,” he said.

The family of four traded in a three-bedroom, one-bathroom place for a six-bedroom, four bathroom Colonial. They got a 30-year fixed mortgage with a rate of 2.99%.

This Is Why Nobody Wants President Trump’s Childhood Home—Will Crowdfunding Help?