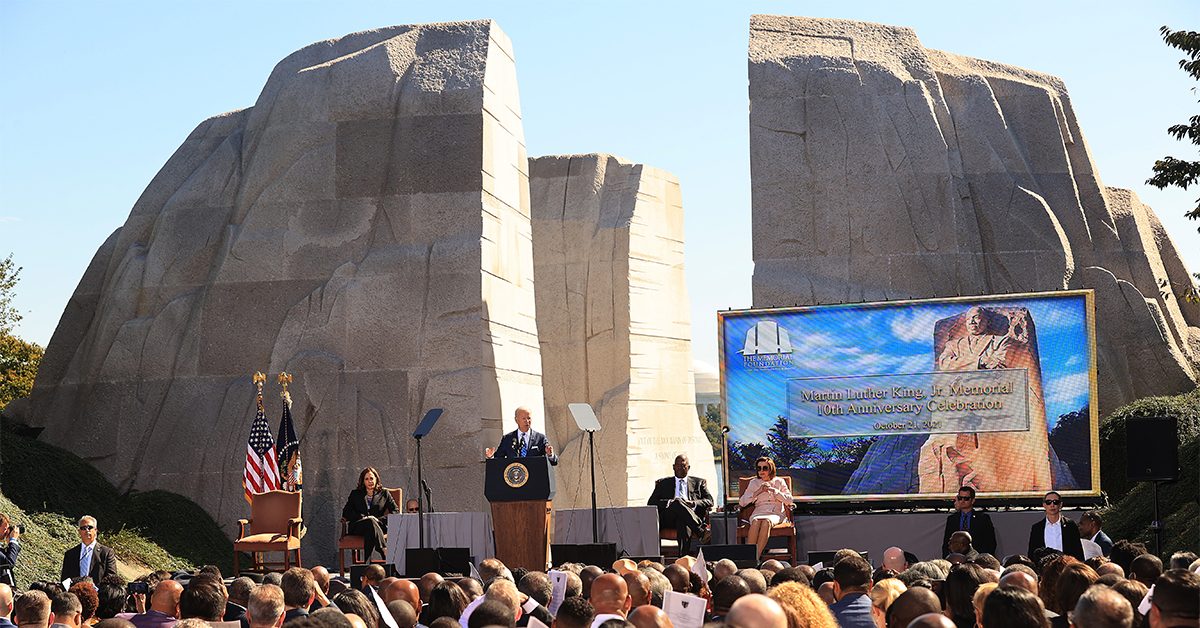 WASHINGTON (October 21, 2021) – National Association of REALTORS® President Charlie Oppler, with a delegation of members and association staff, commemorated the 10th anniversary of the Martin Luther King Jr. Memorial this week in Washington, D.C.

NAR was an early supporter of the memorial, donating $1 million to the project in 2007.

The Memorial Foundation, builders of the Martin Luther King Jr. Memorial on the National Mall, hosted an anniversary dinner on Wednesday evening, followed by a ceremony at the memorial on Thursday. President Joe Biden and Vice President Kamala Harris were honored guests at the festivities, where NAR was recognized among other memorial sponsors.

“The memorial to Dr. King fittingly stands at the center of our nation’s capital, as his legacy is central to many of the issues we face today,” Oppler, a REALTOR® from Franklin Lakes, N.J., and CEO of Prominent Properties Sotheby’s International, said. “REALTORS® have a strong connection to – and responsibility for – Dr. King’s dream, as he brought the fight for fair housing to the forefront.

“We’re proud that NAR partnered with the Memorial Foundation over a decade ago to help build this memorial,” Oppler continued. “Today, we have strengthened our commitment to carrying on Dr. King’s important work and creating more equitable communities for all.”

In his remarks at the memorial, President Biden acknowledged the importance of generational wealth-building through homeownership. “We’re aggressively – with the leadership of some of the people I’m looking at right now – combatting housing discrimination to create a generation of wealth,” he said.

“How did every other person make it to the middle class from a working class circumstance? Just like my dad did: Built equity in a house.”

NAR made addressing housing inequality and racial discrimination in real estate one of its top policy priorities of 2021 and continues to advance its Fair Housing Action Plan (ACT). The association also offers an interactive fair housing simulation training called Fairhaven and an implicit bias training video for REALTORS® and the public.

In April, during National Fair Housing Month, NAR hosted a Facebook Live event with the Memorial Foundation called “The Past, Present, and Future of Fair Housing.” The program, headlined by Department of Housing and Urban Development Secretary Marcia Fudge, explored Dr. King’s enduring legacy and the ongoing work to further fair housing in America.

The National Association of REALTORS® is America’s largest trade association, representing more than 1.5 million members involved in all aspects of the residential and commercial real estate industries.

Houses For Sale By Owners--Here Are 10 Tips For Success. 1. Do Your Homework. Take some time to...
Continue reading
by Ingming Aberia

Prime House and Lot (or Lot Only) For Sale at Highlands Pointe at Havila, Angono-Antipolo-Taytay, Rizal